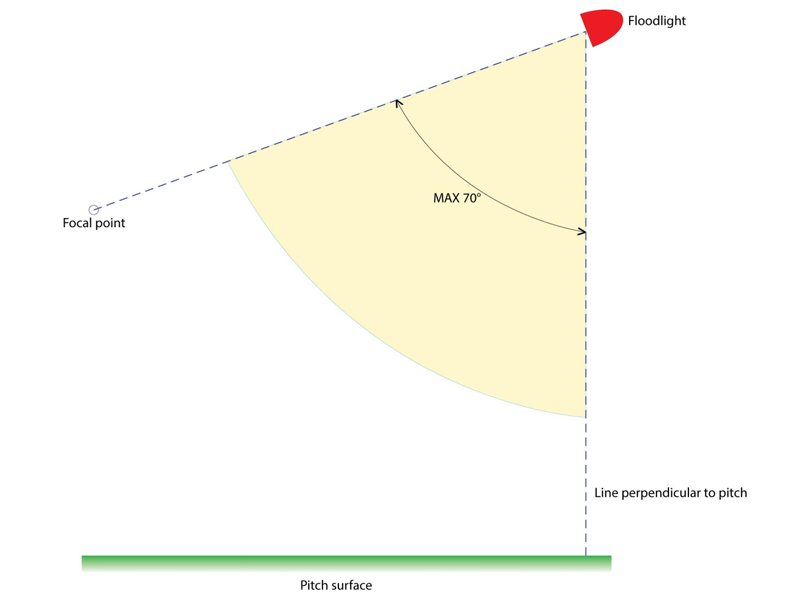 In order to avoid discomfort glare being experienced by players and officials, a general rule during the design process is to ensure that luminaires’ focus point angle is no more than 70° from the line perpendicular to the pitch, as in the diagram above. This is a good general guideline, but it will not always be possible owing to the constraints of the stadium’s design.
The above guidance is particularly relevant to point source illuminance systems, as generally seen with high-intensity discharge lamps. However, it may be necessary to re-evaluate this guidance when using LED luminaires, which will generally have large arrays of LEDs producing direct point source luminous flux. 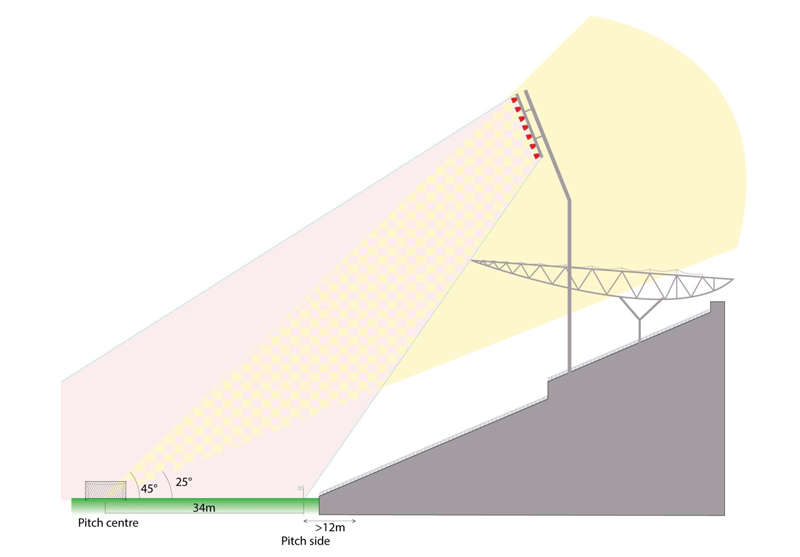 In order to avoid discomfort glare being experienced by attacking players looking towards the goal, additional provision is made by increasing the installation angle of luminaires directly behind the penalty area (as shown in the diagram above). 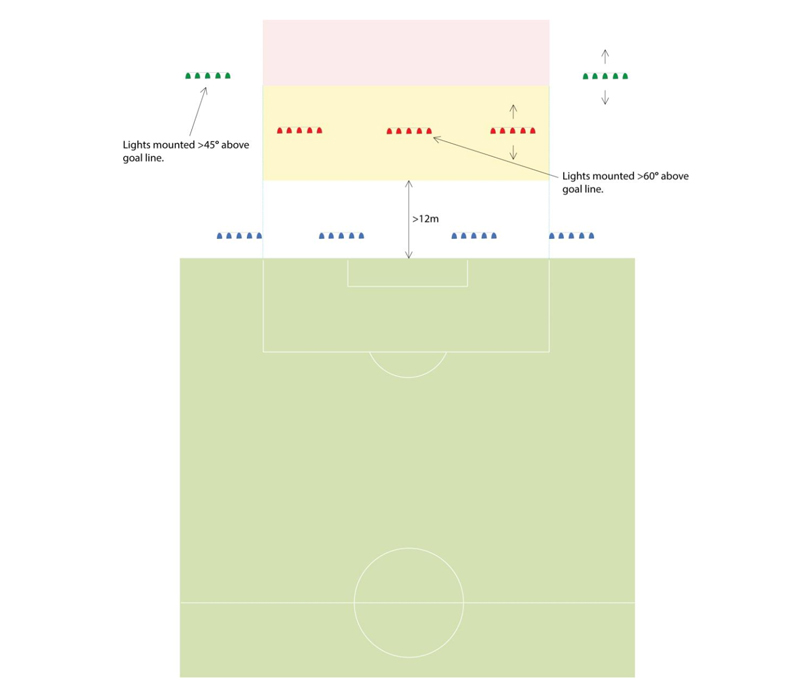 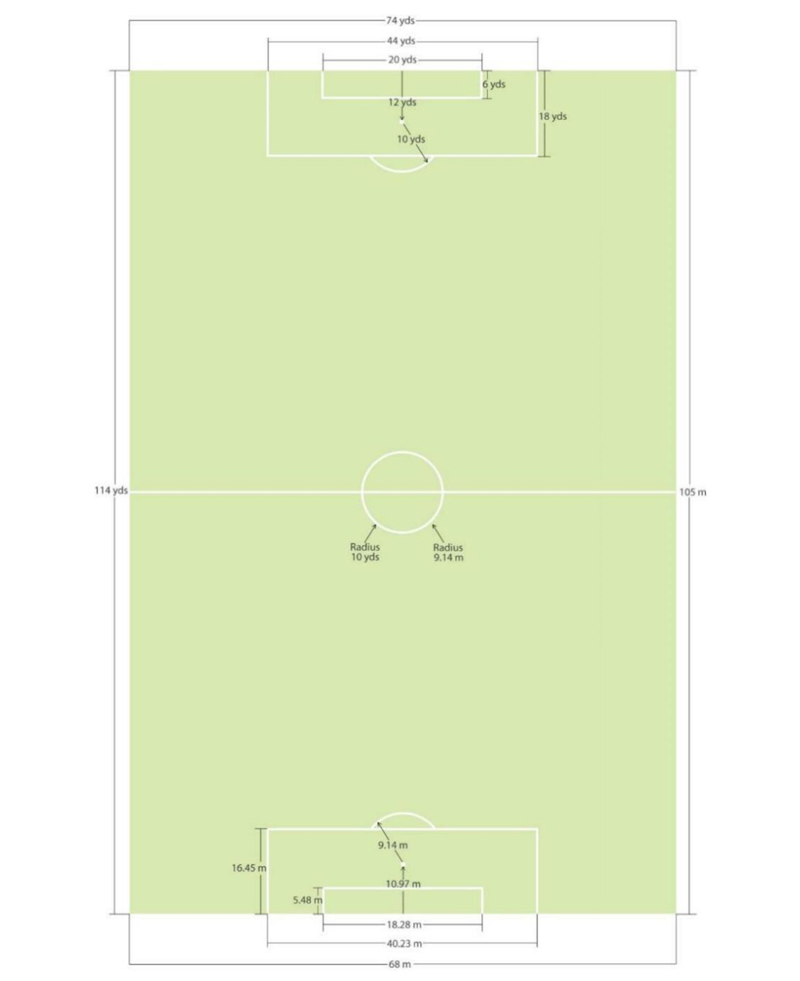 Glare is the sensation produced by luminance within the field of vision that is so much stronger than the eyes are used to that it causes annoyance, discomfort and/or impaired visibility and visual performance.

Discomfort glare is caused by direct glare from luminaires which are too bright, inadequately shielded or too large in size. It is also caused by reflected glare from specular surfaces lit by other sources (which in a stadium may be the sun).
When the eye has got used to the dark, it is particularly susceptible to the impairment and depression of central vision when a bright light enters the field of vision.

The method of determining the glare effect of a light source or a group of light sources is complicated. Glare will certainly increase as the number of light (or glare) sources increases and the size of the light (or glare) source increases. The size, luminance and position of light sources will all affect the level of glare that is experienced.
Glare is a subjective factor, for which a practical evaluation system has been devised for outdoor sports applications by the International Commission on Illumination (CIE) on the basis of extensive field tests. The CIE 112-1994 Glare Evaluation System for Use within Outdoor and Area Lighting – http://div5.cie.co.at/?i_ca_id=599&pubid=166 - defines a glare rating (GR) with an assessment scale of 10 to 90. The lower the glare rating, the better the glare situation.
The validity of this system is restricted to viewing directions below eye level, and it is mainly used for predicting the degree of glare. During the lighting design phase, a glare assessment based on CIE 112-1994 should be carried out. Calculations should be made for observer positions using the grid points on page 58. Assessments should be made every 15°, starting from 0° or 180°, over a total of 360°. Observer positions should be 1.75m above the pitch surface.
The maximum glare rating and the corresponding direction should be displayed for each observer position.

This involves the pitch illuminance system operating in a manner that satisfies the requirements specified for the relevant UEFA illuminance level.

This mode should automatically be activated when the primary power supply fails. The pitch illuminance system should switch to the MCM and perform in accordance with (or above) the minimum standards specified for the relevant UEFA level.
In terms of the uniformity of illuminance, U1 must be greater than 0.5 on the horizontal plane and 0.4 on the vertical plane. It is not considered necessary to evaluate U2 for the MCM.
The MCM is essential and should be part of the design process. In order for this mode to operate successfully, the power supply facilities and options available must be carefully considered during the design process.

This involves the pitch illuminance system operating with an average horizontal illuminance of 500 lux.

This involves the pitch illuminance system operating with an average horizontal illuminance of 250 lux.

During broadcasts, we can often see that some illuminance systems cause the picture to flicker during slow-motion replays. The flicker is distracting and impairs the viewer’s experience, so it should be eliminated where possible. The circumstances that produce the flicker will vary depending on the modulation of the flicker, the alternating voltage frequency and the camera frame rate.
The term ‘flicker factor’ refers to the amount of modulation of luminance on a given plane during a complete cycle. It denotes the relationship between the maximum luminance value and the minimum luminance value over a full cycle and is expressed as a percentage.
Flicker: A rapid and repeated change in the brightness of light over time.
Modulation: A measure of light variation during periodic oscillations.
The flicker factor is calculated using the following formula: 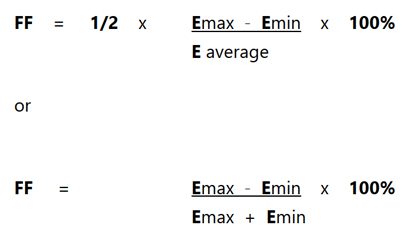 Where:
E represents the illuminance level during a complete cycle.
In all but the most extreme circumstances, it is possible to eliminate the flicker that is seen during slow-motion replays. The table on the next page provides a general indication of the flicker factor values produced by various illuminance systems.
A flicker factor of less than 5% will not generally cause problems for slow-motion replays of up to 300 frames per second. While the number of frames per second will vary depending on the technology used, an illuminance system with a flicker factor of less than 5% will eliminate perceived flicker for most technology used within the sports television industry. 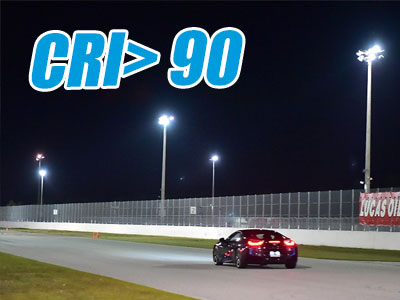 If you have ever seen a wreck, you know the dangers a car can present, primarily when driven at ... 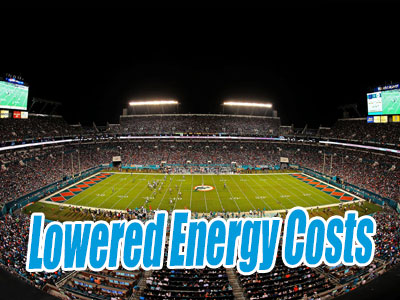 In 2013, the Super Bowl was delayed after a power disruption knocked off some lighting. It didn’...