Home > News > Industry > What are the characteristics of a football field lamp?

What are the characteristics of a football field lamp?

Do you want to know how to keep LED lights maintenance cost be minimized?
Do you want to have high lumen output, super brightness high power LED sports lights?
Do you want to know how much you will save if using our lights?
Are you still worry about not finding a good quality, long life stadium light?
Do you want to do the best lighting design for your project?
Do you want to know what lights are used in the World Cup football field lighting project?
What are the characteristics of a football field lamp?
Are LED football stadium lights the new favorite of the World Cup?
The quadrennial World Cup has come to an end. The French football field beat Croatia 4-0 to win the World Cup. but as we all know, the Croatia team is also very strong. The match was really exciting. However, when we watch live TV on TV, we often wonder: what kind of lighting can meet the needs of referees, athletes, spectators and TV viewers at the same time?
The most important goal of the football stadium lighting is to light up the playing field, to provide the media with high-quality digital video signals, to provide athletes and referees with no disgusting glare, to protect the audience and the surrounding environment from overflow and glare, beside, to solve a series of problems of traditional lamps.
Mounting Height of Luminaire
The height of the football field lighting installation determines the success of the lighting system.Framework of the light or the height of the pole should satisfy the starting from center of the stadium towards auditorium with about 25 ° Angle. Lamps and lanterns framework or the height of the light pole could be more than the minimum Angle 25 °, but should not exceed 45 °. 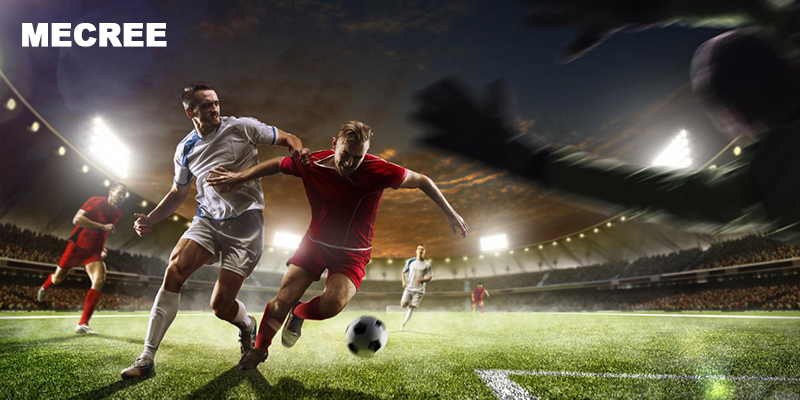 Camera Angle Considerations
The football field lighting system is usually divided into five levels (level I and level V).Two of these levels require high quality television coverage.The other level does not require television coverage.In cases where there is a need for TV transmission, in order to ensure that each camera receives enough light and records high-quality videos, the lighting design should take into account the camera position actually used.
The primary objective of the football field lighting is to ensure the light symmetry between the edge line and the bottom line of the field.
Audience and Broadcast Perspective
Providing a non-glare environment for athletes, referees and media is the most important design requirement.The following two areas are defined as the dazzle area, where the luminaire cannot be placed.
(1) the corner line area
For the goalkeeper and corner region of the attacking players to maintain good vision, football stadium lights should not be placed in the area of the 15 ° on both sides of the line.
(2) the area behind the goal line
In order to give the ball in front of the attacking players and the other side of the guards and grounds of television station staff to maintain good vision, after the football stadium lights should not be placed in the line behind the scope of 20 ° and above 45 ° line level over the area. 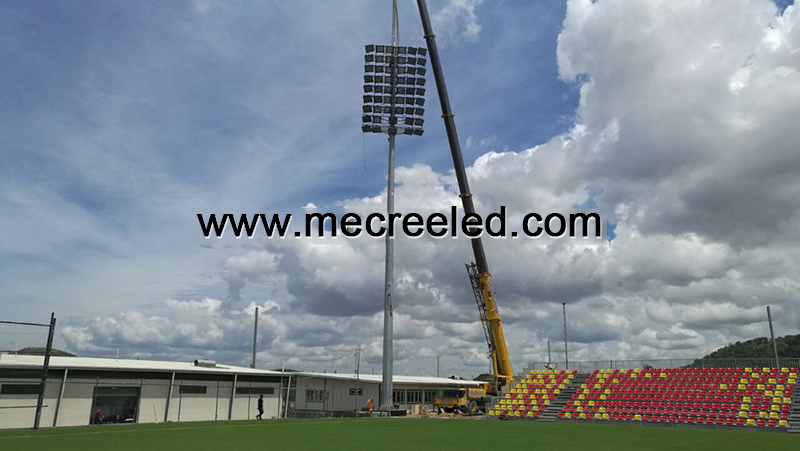 Lamp Selection
The choice of lamps and lanterns is also of vital importance to football matches. A few years ago, the lighting of the football field chosen by the outdoor stadium was generally made of metal halide lamps. But in the use of the process, the constant problems, the football field caused a considerable disturbance! Such as dazzle, exterior overflows, lamps and lanterns the quality problem is frequent coursed by high temperature, affected the progress of professional football game seriously.
Since then, the stadium has replaced the football stadium lighting with a more advanced LED sports lighting. MECREE also occupies a unique position in the field of football field lighting.It is known that MECREE is the first Chinese company to provide high-power sports lighting for large international sports events in China. MECREE appeared in the World Cup as the lighting supplier of the U20 women’s World Cup!
MECREE’s lighting lamp is a new generation of green lighting system, which minimizes the light pollution to the surrounding environment, effectively prevents the overflow and glare, minimizes the light outside the site, protects the beautiful night sky, and provides the lighting of football fields for athletes and spectators, so as to create a more comfortable competitive and viewing environment.