If the venue is only used for non-competition competitions and physical training, the installation height of the lighting device is 15m; if the venue is also used for ball training and club competition, the design should consider the influence of glare, and the installation height of the lighting device should be at least 18m. Avoid interference with the goalkeeper. The lighting method should be 8 poles, at least 6 poles. The poles near the four corners should be on the diagonal and behind the goal line, so that the goalkeeper can provide a good lighting environment when cornering. 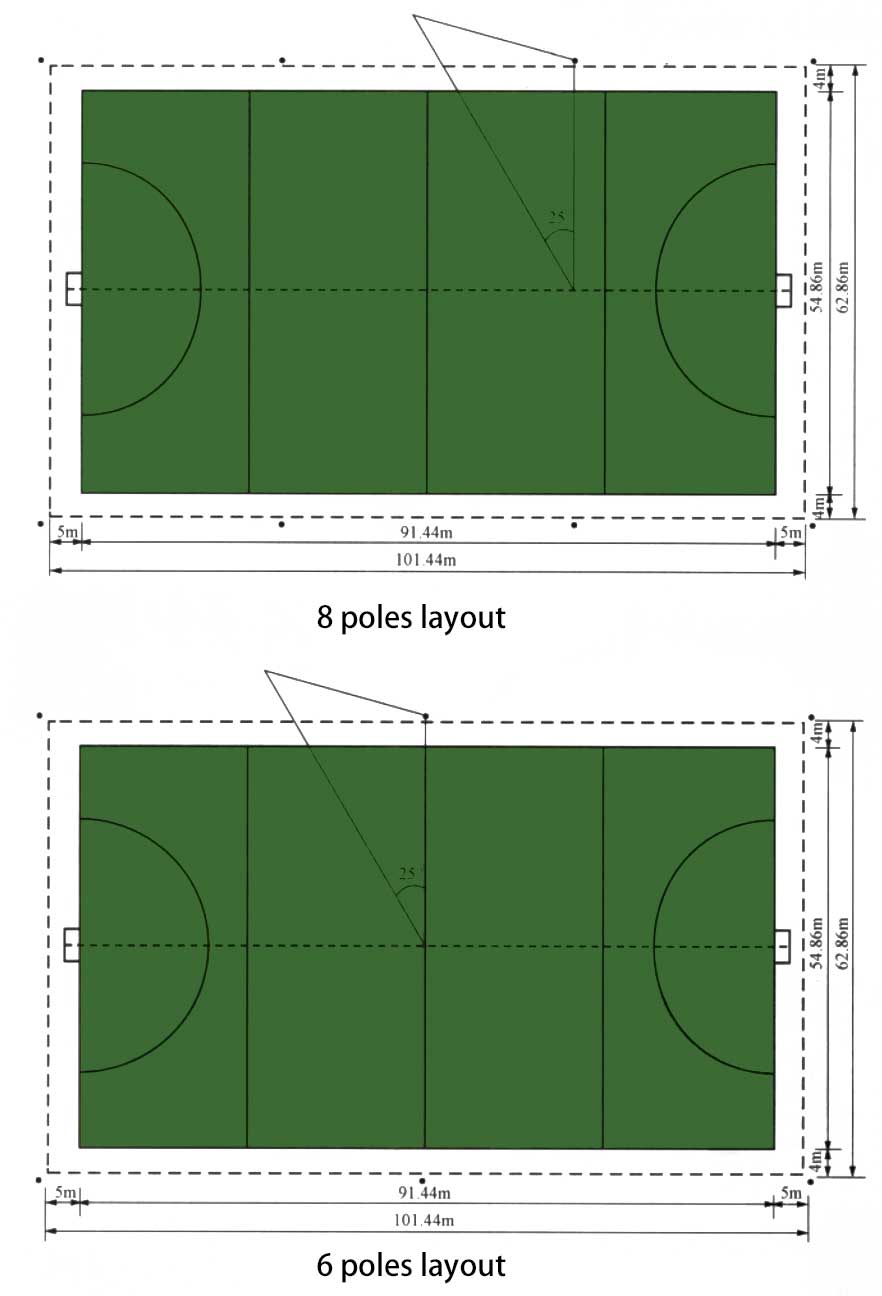 (1) Side layout. The luminaires can be equipped with multi-bar lamps (mounted on the light pole beacon) or light strips (arranged in parallel with the edges).
Since the lateral lighting better solves the uniformity of vertical illumination, it is a better lighting scheme. If the audience is small, it is recommended to use a multi-bar light. If you want to reduce the investment, you can reduce the number of poles, and the uniformity of illumination can be acceptable. In order to avoid the interference of the pole to the viewer’s line of sight, the pole should be placed behind the auditorium. 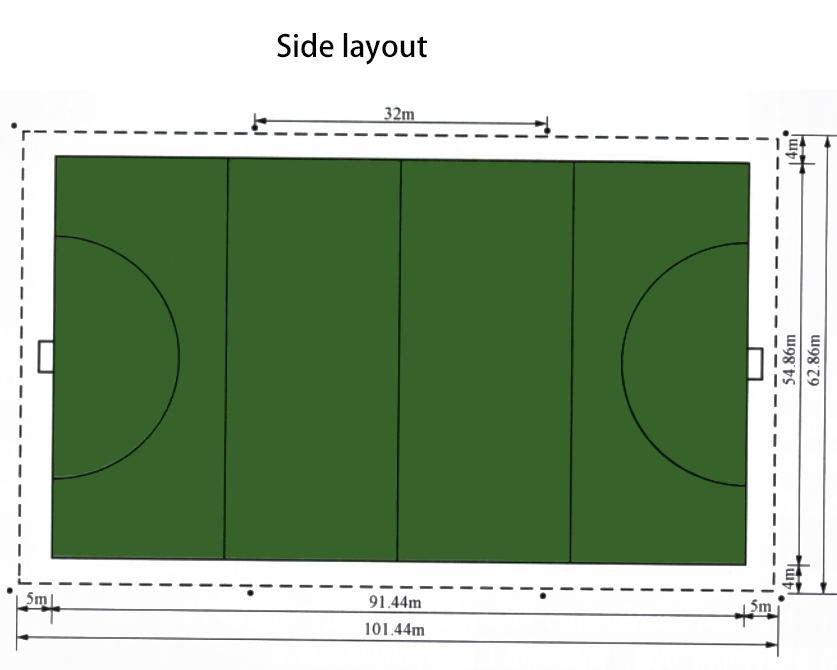 A higher grandstand roof can affect the multi-bar lighting system. At this point, you should choose another side lighting system, a light belt cloth light, which can provide the best illumination uniformity without shadows, and the economy is better than the multi-bar system.

(2) Four-corner layout. The luminaires are mounted on poles or lighthouses at the corners of the hockey field. 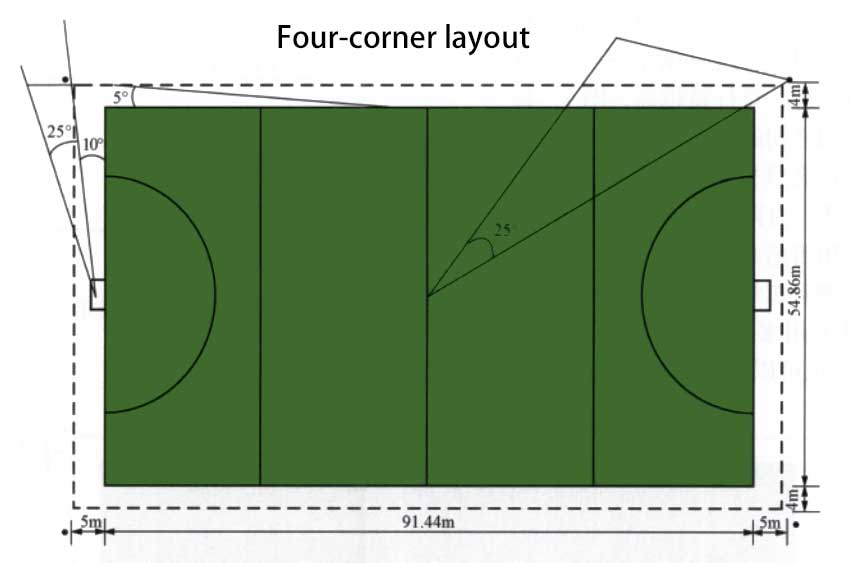 (3) Mixing layout. Examples of the use of a combination of a four-corner cloth and a side-mounted cloth are often seen, and the advantages of the two hybrid lamps are more prominent. The lateral lighting is used to increase the vertical illumination of the area near the edge of the light, and the lighting of the four-corner lighting is used to add vertical illumination to the farther areas of the stadium.

The higher lighthouse not only adds to the investment, but also creates an imbalance between the vertical illumination and the horizontal illumination. The advantage of the high lighthouse is that it can effectively limit glare and shorten the shadow.

Regardless of which lighting scheme is used, the angle requirements described above must be met.

(1) While ensuring maximum visual comfort for athletes, the luminaire should create a natural atmosphere with just the right shape.

(5) There should be illumination from at least 3 directions anywhere in the competition venue. For a fixed camera, the light in the third direction can act as background light for the other one or two directions of light.

(8) No lighting related equipment (such as truss beams, lamps, cable coils, chain engines, etc.) shall be placed in the designated area of ​​each fixed camera and at the four corners of the competition venue.

First, let’s talk about the kind of lighting best suited for hockey rinks. LED luminaires are the best option for lighting in most, if not all circumstances where lighting is needed. This is especially true for sports lighting since the game depends on how well lit a stadium or rink is. Sports LEDs are tough and build to withstand harsh weather so even in outside areas, the lighting is durable and won’t be negatively impacted by repeated exposure to rain, snow, and other elements. On the other side of the spectrum regarding the elements, sports LEDs are also built to withstand extreme temperatures. Passive cooling technology allows for a longer life expectancy and helps the LEDs stand up to hotter climates.

Sports LEDs can typically be controlled wirelessly. This allows for an easier way to turn luminaires on and off. Some may even have the option of controlling just a few of the luminaires or a group of luminaires so you can brighten or dull areas as needed. Most of these can be controlled from any device, from phones to laptops. They can also be managed with or without a wi-fi connection.

LEDs perform much better than traditional fluorescent lighting used in some rinks. LEDs offer a glare-free experience where fluorescents may not and they are also more energy-efficient, reducing the overall cost to operate the hockey rink.

Hockey games come with the potential for avoidable injuries. Proper lighting for hockey rinks is crucial for the safety of referees and players. If a hockey rink is not well lit, it can make it difficult to see the puck. Hockey pucks are a hazard to players and spectators alike. Matter of fact, there have been several lawsuits from spectators due to injuries sustained in a hockey arena. A hockey puck can cause minor injuries such as fracturing a finger, all the way up to potentially deadly brain injuries if someone were to be struck in the head. Using proper lighting gives players and fans an advantage so they can clearly see where the puck is at all times and take measures to avoid it if an accident were to occur.

Improper lighting can cause glares to reflect off the ice, making it difficult for players to perform their best. Not only could a glare off the ice affect the players, but glares could make it less enjoyable for fans to watch.

Nobody wants to pay for tickets to a game they struggle to watch due to improper lighting. By using proper lighting in hockey rinks, spectators can enjoy the game thoroughly. Dull lighting can make it difficult for fans to watch plays, resulting in an experience that is boring and unenjoyable.

Other types of luminaires may cast shadows onto the rink where LEDs provide a wide coverage, illuminating the entire rink without shadows.

Operating a hockey rink is a hefty expense, from paying for cleanups and maintenance to the utility bills that come along with it. Improper lighting can raise energy costs significantly, making it harder to maintain the upkeep.

LEDs only produce 5% of their waste as heat, converting 95% of the energy to light. Since heat in hockey rinks is bad, HVAC units are used to maintain a proper temperature. With LEDs producing such little heat, there is less need to run HVAC units, resulting in lower energy costs.

Proper lighting for hockey rinks reduces maintenance costs for the luminaires. LEDs are low maintenance, high-quality luminaires that can last years even in harsh climates. You can expect most LEDs to last 60,000 hours or more. This number may not seem like much but take into consideration how difficult it would be to constantly fix and replace luminaires that are 20 feet or higher off the ground. 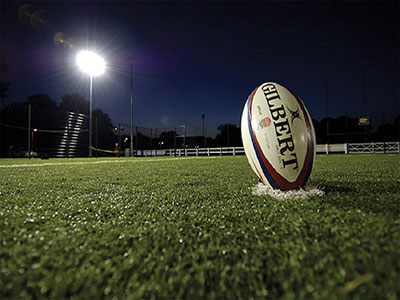 LED Rugby Field Lighting | How to light a rugby field?

Rugby field lighting is an important part of rugby game, which is of great significance to rugby... 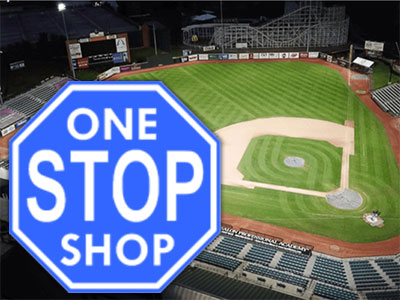 What We Can Do for Your Baseball Field Lighting? | One-stop Service

We provide baseball field lighting systems that are compatible with world class tournaments (for ...